We are pleased to announce that the first official Eclipse Aarch64 package running on Raspberry Pi OS 64-bit is now available for evaluation from:

And, last but not least, SEGGER, the manufacturer of J-Link, the market-leading debug probe, fully committed to support the industry migration towards Arm platforms, recently released V6.84 of the J-Link Software, which also includes Arm binaries that run on Raspberry Pi (download). The SEGGER graphical tools (Ozone, SystemView, etc) will be available at a later date.

With all these components in place, now the whole development cycle - create, build, flash and debug - can be performed directly on a Raspberry Pi 4 single board computer.

The current pre-release is intended for evaluation and feedback. A final release is planned for the second half of September, after Eclipse 2020-09 is out.

The project also has a new web site, available from:

(the site is still work in progress, thank you for helping to improve it)

Those who want to evaluate the new Eclipse are invited to follow the Getting Started steps in the project web, starting with the Prerequisites, Install a New Eclipse, up to the Blinky Arm Tutorial, which ends with a debug session blinking 4 LEDs in an emulated STM32F4DISCOVERY board. 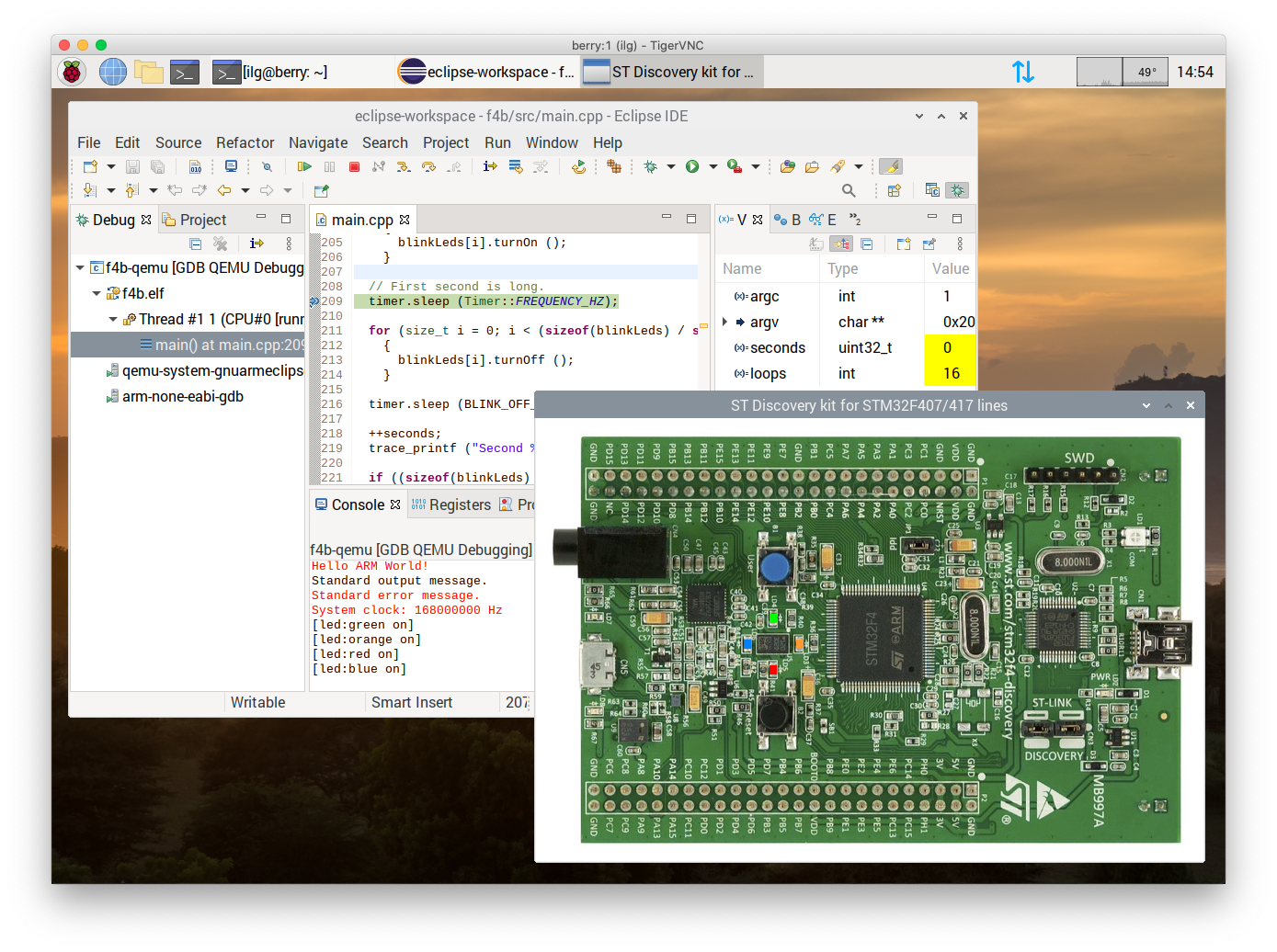 For now the Eclipse for Aarch64 is built using the same procedures as the Eclipses for Intel, and requires the same Java 11 package (or higher) from Oracle.

We are aware that Java and especially Eclipse have both heavy implementations and generally running them on a small platform may require a bit of patience. At this moment, startup is slow; occasionally it takes some time for a menu item to appear, but subsequent accesses should be ok. Sometimes Eclipse may require a restart. If you run htop in a separate terminal, you can see when Java is busy compiling the byte code. The graphical CPU usage monitor enabled in the top bar may also give a good indication when Eclipse completed the startup.

This first Raspberry Pi release is about providing functionality. If you are a Java/Eclipse developer and feel inspired, your contributions to improve performance will be highly appreciated.

The systems used for development are Raspberry Pi4, with 8GB RAM, booting from a SanDisk Extreme Portable 250GB, USB 3.1, SSD. It is possible to run Eclipse in 4GB RAM, but 8GB and a fast SSD disk provide a better experience.